Who would have known? Two is better than one….right? Wrong!

Therefore, when used in conjunction with one another you experience unanticipated results. Most particularly the pad forces the void, once full, to roll over the sides to be absorbed into the protective underwear. This isn’t an optimal solution; as at this point the urine is further from centerline and closer to the perimeter increasing the likelihood of leakage.

There are pads on the market that are permeable, but even utilization at this point increases thickness of items used and potential heat buildup. 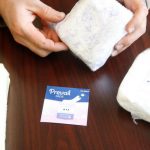 Thicker Is Better In Steaks & Wallets… But Not IncontinenceIncontenence, Tips & Advice